You Are Here: Home » Attacks » Settlers attack on Qusra village and the killing of ‘Isam ‘Oda by Israeli occupying forces

The village of Qusra, near Nablus in the north of the West Bank, is a frequent target of attacks by Israeli settlers. During the last month alone, Al-Haq has monitored and documented five incidents of settler violence in or around the village, ranging from intimidation, arson, vandalising of the village’s mosque and attacks on the residents’ livelihoods, including the uprooting of olive trees.

Last Friday, 23 September, ‘IsamKamal ‘Oda, 37 years old, was shot and killed by Israeli soldiers after he had confronted a group of settlers who were damagingand uprooting olive trees on the village’s land.

The attack on Qusra and the killing of ‘Isam ‘Oda

At around 1:30 pm on 23rd September, the imam of Qusra’s mosque announced that settlers from EishQodish outpost had been seen at a distance of300metresfrom the centre of the village (see map below). He reported that they were uprooting and breaking the branches of olive trees.

After prayers, the residents of the village approached the area to prevent the settlers fromcausingfurther damage to their property. According to Al-Haq’s field report, there were 15-20 armed settlers, with anIsraeli flag, present on the village’s agricultural lands. There were also approximately eight Israeli military jeepswhich had been stationed at a nearby, temporary, military outpost. When Palestinian youths startedthrowing stones at the settlers to drive them from the land, the soldiers immediately began shooting tear gas canisters and rubber bullets. 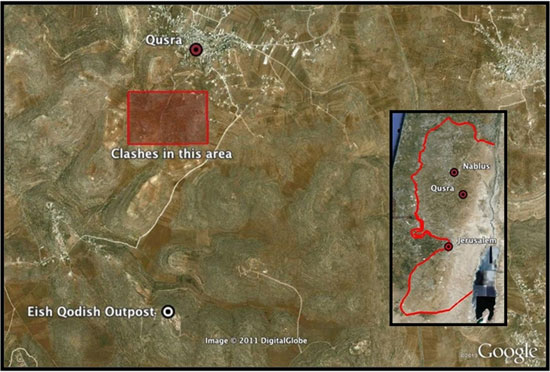 After around 90 minutes, the settlers hadmoved to an area 500metres to the west. Once again the settlers began damaging trees and the Palestinian youths threw stones at them. Soldiers in two Israeli military jeeps approached the area, and shot tear gas canisters, rubber bullets and live ammunition at the Palestinians. Five residents of the village were injured and two were detained. Those arrested were handcuffed, blind-folded, beaten and taken to the settler outpost by the Israeli forces.

The fatal shooting of ‘Isam occurred a short while later. According to statements from two witnesses, at 4pm ‘Isam ‘Oda was hit by a soldier with live fire from a distance of 15metres as he bent down to pick up a stone from the ground (see Al-Haq affidavits No. 6633/2011 & 6634/2011). The bullet entered his right hip and exited from the back of his neck. A friend, Muhammad Hasan, approached ‘Isam and together with two other youths carried him to an ambulance that was 300metres away. ‘Isam, who was married with seven children, was pronounced dead at 5pm. 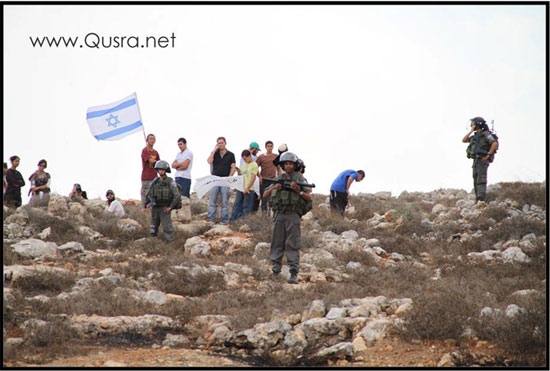 The killing of ‘Isam occurred in the context of an alarming escalation in settler violence during the month of September. The threat faced by residents of Palestinian villages situated close to Israeli settlements is exacerbated by the actions of the Israeli army who regularly stand by during attacks by settlers, often facilitating their conduct. Moreover, the Israeli authorities continue to grant impunity for settler violence at the expense of the life, health, safety and livelihood of the Palestinian civilian population.

Read more about the failure of Israel, as an Occupying Power, to fulfill its obligations under international law to protect the occupied Palestinian population in this brief on the The ‘Price Tag’ Policy.

Also see Al-Haq’s new Interactive Map on the escalation of settler attacks for details of other incidents this week.