You Are Here: Home » Attacks » Moment Israeli settlers are cornered and ‘beaten up’ by Palestinian villagers for ‘throwing stones at farmers’ in the West Bank 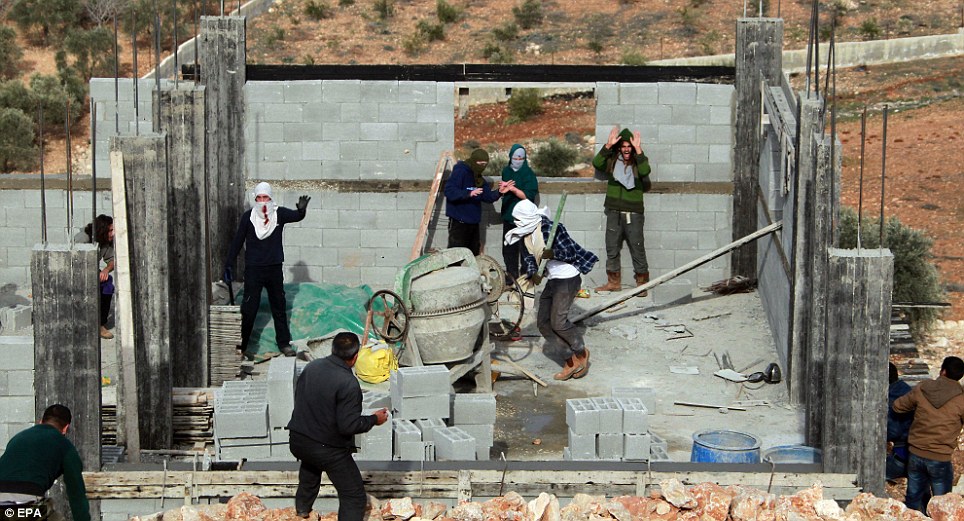 A group of Israeli settler children have been pictured apparently being cornered and beaten by Palestinians after witnesses said they had attacked farmers near a West Bank village.

The settlers  – aged in their teens and 20s  – were held for about two hours at a house under construction before being handed over to the Israeli military.

During the standoff, the settlers huddled near a wall of the house, several bleeding from the head, and one was lying on the ground.

It is said that the Israeli settlers had been hurling rocks at farmers working on nearby fields.

By the time Israeli soldiers arrived, the crowd surrounding the settlers had grown to about 200 people, an photographer on the scene said. People kicked and spat at the settlers as they were led away by soldiers.

It is believed Tuesday’s incident was the first time settlers were captured and held by Palestinians.

The Israeli military said it had received word of a stone-throwing clash between settlers and Palestinian farmers and that it later evacuated 11 settlers with light and moderate injuries from the building. 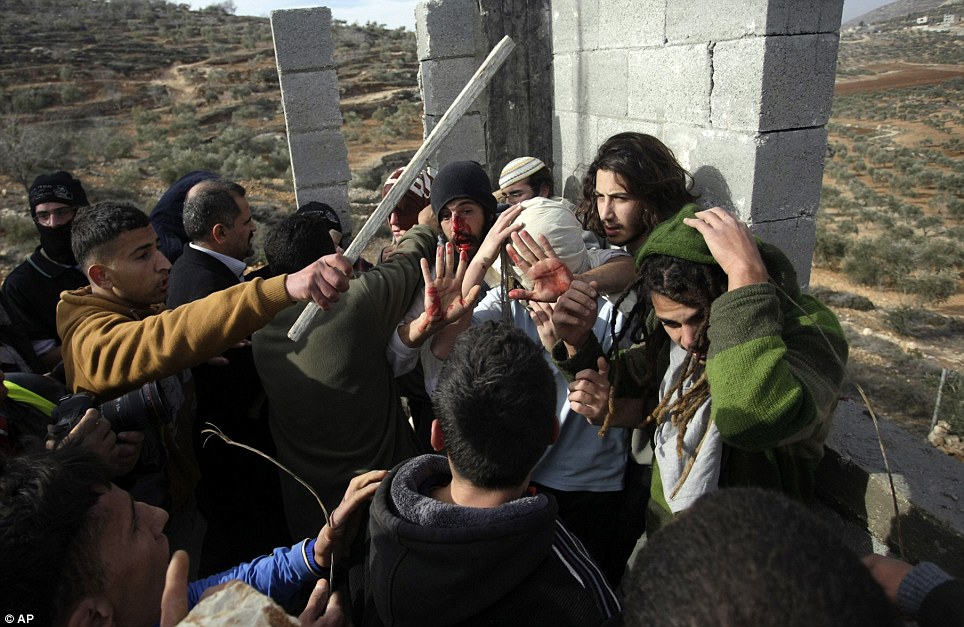 The incident began at about 10.30 am near the West Bank village of Qusra, southeast of the city of Nablus, said Ziad Odeh, the Muslim prayer leader in Qusra and a member of the village council.

He said about 25 to 30 settlers, many of them masked, attacked Qusra farmers in an olive grove with sticks and stones, injuring a Palestinian boy in the head. A clash ensued, farmers called for reinforcements and about 100 youths arrived from the village, Odeh said.

The settlers ran away and the villagers gave chase, said Odeh and another witness, village resident Abdel Hakim Wadi.

They said several of the settlers sought cover in the building under construction, located on the edge of the village of Karyout, about four kilometres (2.5 miles) from Qusra.

Villagers grabbed them however and turned the building into a holding area where they also put other settlers they chased down in the area, Odeh said.

Some of the settlers were tied up, and most had signs of beating injuries, according to an photographer at the scene.

Odeh said the beatings stopped after the settlers were seized.

‘When they were caught, they were beaten, but after we brought them to the building, we did not let anyone beat them,’ said Odeh, adding that the captives were given water and bandages for their wounds.

Odeh said the settlers involved in the attack on the Qusra farmers were in their late teens and 20s.

The military said the chain of events apparently began after Israeli authorities removed an illegally built structure in Esh Kodesh, a rogue settlement in the area.

In recent years, militant settlers have often responded to any attempts by the Israeli military to remove parts of dozens of rogue settlements, or outposts, by attacking Palestinians and their property.

Villages in the area have repeatedly come under attack by militant settlers, said Odeh, adding that assailants also set fire to four area mosques in the last three years.

A U.N. monitor says that from 2006 to August 2013, there were 630 settler-related attacks on Palestinians and 1,344 attacks on their property, with the pace of incidents rising since 2008. In all, 10 Palestinians were killed and 1,040 injured in such attacks, according to the U.N. Office for the Coordination of Humanitarian Affairs (OCHA).

During the same period, 29 Israeli civilians were killed and 368 injured by Palestinians in the West Bank, OCHA said.

In other developments Tuesday, a key political ally warned Israeli Prime Minister Benjamin Netanyahu that he would quit the coalition government if Israel recognizes its pre-1967 war frontier as a starting point for border talks with the Palestinians.

Such recognition is expected to be part of a proposed framework for a peace deal to be presented by U.S. Secretary of State John Kerry in coming weeks. Kerry returned to Washington on Monday after a mediating mission that included meetings with Netanyahu and Palestinian President Mahmoud Abbas.

The Palestinians want a state in the West Bank, Gaza Strip and east Jerusalem, lands Israel captured in 1967, but are ready to accept some modifications that would enable Israel to keep some of its settlements.

Netanyahu has so far refused to accept the 1967 frontier as a baseline for negotiations or consider a partition of Jerusalem – at least in public.
Naftali Bennett, head of the pro-settler Jewish Home party, a key coalition member, warned Netanyahu against softening his position.

‘The lines of ’67 mean a partition of Jerusalem,’

Bennett said in comments carried on Israel TV’s Channel Two. ‘We will that sit in a government that because of international pressure endangers the future of our children and divides our capital.’

Earlier, the U.S. ambassador to Israel said Kerry’s framework proposal will be presented to both sides in a few weeks.

Dan Shapiro told Israel Radio that the proposal will include security arrangements, borders, Jerusalem and all the other ‘core issues.’ 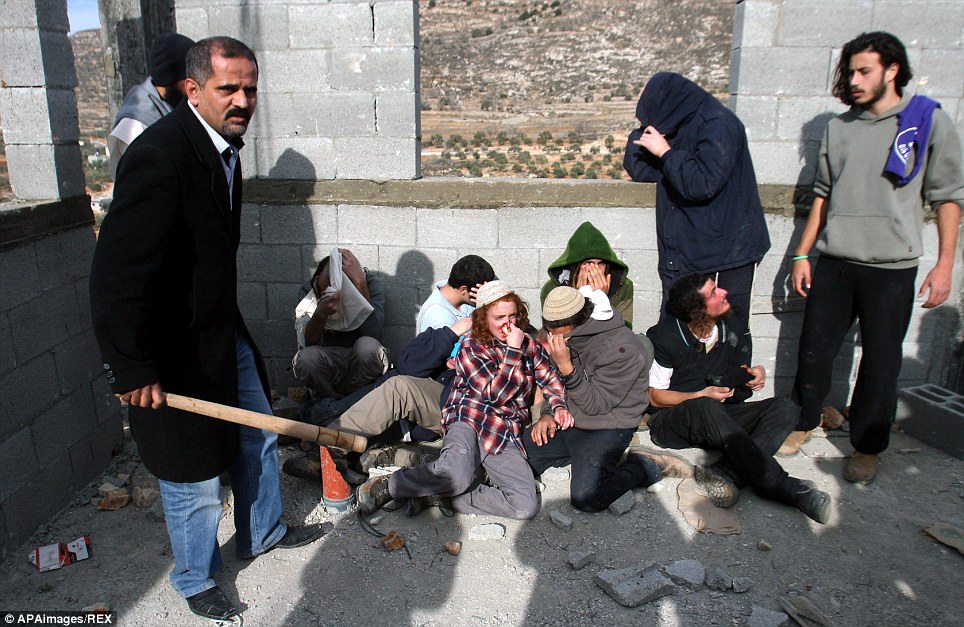