آخر الأخبار
الرئيسية » أخبار محلية » ‘A history of violence in Qusra, Not ‘clashes’, but ‘pogroms

‘A history of violence in Qusra, Not ‘clashes’, but ‘pogroms

The attack against Palestinians in Qusra yesterday was not a ‘clash,’ it was a pogrom – and, as usual, it took placeunder the aegis of the IDF. 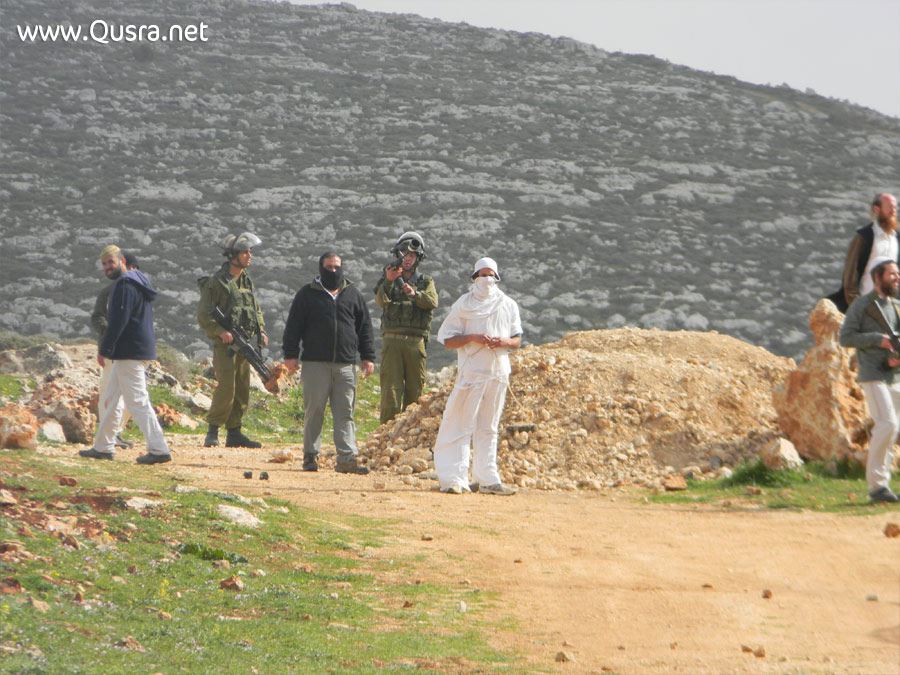 A group of settlers coming from the direction of one of the most notorious outposts, Esh Kodesh, raided the Palestinian village of Qusra yesterday (Saturday). Some six Palestinians were wounded. The Israeli media reported a “clash” in the village. There wasn’t one.

A clash is what happens when two sides of more-or-less equal strength face off with one another. What took place in Qusra is much more similar to the Czarist period and to the American South before the passage of the civil rights laws: a group of bullies attacking a persecuted minority, and then received the protection of law enforcement forces.

Look at the pictures, taken yesterday: settlers and soldiers firing together at the residents of Qusra, while the latter stand on their lands. The regular Israel, whose media makes an effort not to report what goes on in the West Bank – more on this below – will automatically excuse it by saying the army has to put down “disturbances of order.” Okay. So what were the settlers doing there? 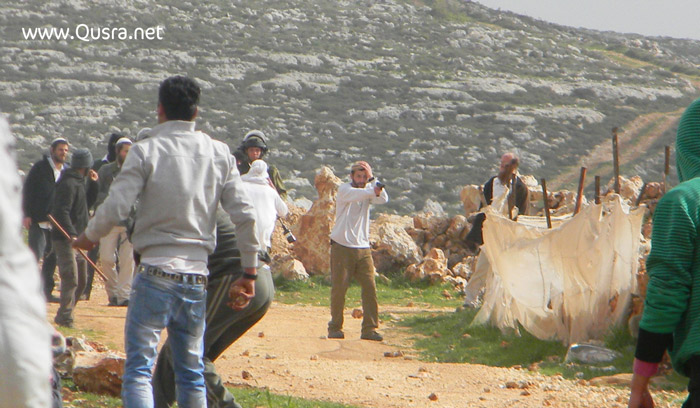 Qusra is a target of particularly wild attacks from settlers to the point where Yesh Din sent an urgent letter to the commander of the Judea and Samaria Division and the commander of the Police District of Samaria and Judea (‘SHAI’) two months ago, demanding they protect the residents from the settlers. We have dozens of complaints by Qusra residents about attacks by settlers. At this point, as far as we know, not a single raider was indicted.

The repeating pattern is one of attacks, theft and property damage – with the police doing nothing and the army becoming a part of the problem. In an incident from last September, Palestinians were attacked by settlers; one Palestinian was reportedly kidnapped by them for a short while. In response, the army forces arrived…. and used tear gas and stun grenades on the Palestinians. The police closed the case, claiming the “perpetrator was unknown.”

A similar incident took place in July 2011, when settlers attacked herdsmen and butchered one of their sheep in front of their very eyes, according to the complaint. The army arrived, and – you guessed it – joined in on the attack on the herdsmen. Many residents made their way to the site, as did some 40 settlers; the army used crowd dispersal weapons, but only against the Palestinians.

Two months later, a Palestinian asked the IDF gunmen to order the settlers to stop uprooting his trees, which they were doing as the gunmen watched idly by. Angry words were exchanged between the Palestinian and the commanding officer, who according to the complaint, ended the argument by firing five rounds – four rubber bullets and one live bullet – at the Palestinian. The gunmen further attacked other Palestinians at the scene, including a 13-year-old boy.

In March 2011, there was an unusually serious incident in Qusra: settlers were raiding the village and the residents organized to defend themselves. As a result of fire by the settlers and the IDF gunmen, at least six (according to the gunmen) or seven (according to the residents) residents were wounded by live gunfire. Three others were wounded by rocks thrown by settlers. The army, naturally, did not use crowd dispersal weapons on the raiders, just on their victims.

And this is just a sample. There have been many other incidents. So what is going on here? For starters, there is a symbiosis between the settlers and the army. They are becoming two arms of the same militia. The army has an built-in problem: it is incapable of understanding that its duty is to protect the residents, not just Jews. No one has highlighted this problem better than the IDF spokesperson, Brig.-Gen. Yoav Mordechai. In December 2011, following an attack by a large number of settlers on an IDF base, reporter Carmela Menashe asked Mordechai how an army colonel who was stoned by the settlers ought to have reacted. He replied (Hebrew): “I assume, Carmela, that you don’t expect the colonel to open fire at a Jew standing in front of him. I’m certain that’s not what you meant.” Of course, shooting at Palestinian stone throwers is daily activity for the IDF.

Another problem is the existence of the Kfir Brigade, which exists specifically to serve the occupation. Many of its soldiers are settlers, and some belong to the “ultra-Orthodox Nahal” battalion. There have been several incidents in this particular brigade in which soldiers announced they would refuse an order to evict outposts, which makes it incapable of doing its job. The fact that such soldiers are deployed specifically in the West Bank is indicative of the attitude of the IDF.

And then there is the media problem. Not so long ago, any self respecting Israeli media outlet would have a Palestinian affairs reporter. Nowadays, few do, but most of them have “settlement affairs” reporters. The result is that Israelis no longer receive information about the territories they occupy and for whose inhabitants they are responsible. The media knows such news annoys its readers, and as most of them have become purely commercial outfits, they don’t have an interest in annoying those paying for their product.

So when everything blows up, and there is reason to believe the fuse is already lit, the Israelis – those who commit the crimes, those in law enforcement who cover them up, those who voluntarily close their eyes and their media enablers – will assume their favorite position, the natal one, and wail to the heavens that they don’t know how this happened.

Written by Yossi Gurvitz in his capacity as a blogger for Yesh Din, Volunteers for Human Rights. A version of this post was first published on Yesh Din’s blog.